For more info on the Festival of Colors, find out more on their website, and facebook page on the links below. The next one will be going on in March!
http://www.utahkrishnas.org
http://www.facebook.com/FestivalofColorsUSA

Check out the making of this video on my second channel (it will be released March 28th) :)
http://youtube.com/devingraham

Film made by Devin Graham
Make sure to subscribe to my channel for new vids almost each week!
http://youtube.com/devinsupertramp

I also had several friends help film this! Here they are!

Jace LeRoy (he's awesome, and films with me on a lot of our videos) Check out Jace's awesome website! http://www.tasteofjace.com
Cameron Manwaring
Grant McCarty
Tristan Wright

My friend Scott Jarvie who was one of the main photographers for the event, you can see some of the behind the scenes of it all in his blog post down below!
http://jarviestudios.com/blog/2012/03/holi-2012-the-festival-of-colors-day1-recap/

For all the shots where the camera was on a pole, we used Contour cameras to get those shots. Check them out.
http://contour.com/

For the actual pole itself that we hooked the camera to, we used a Go-Scope pole. I bought mine on this website. They make them for GoPro cameras, not Contour cameras, so we had to rig the camera to the pole to make it work.
http://go-scope.com/

Find out more about this awesome event in the link below!
http://www.utahkrishnas.org

As far as making the camera look like it was "flying", I used a glidecam 2000 HD for all those shots. You can check out the exact model on their official website below where you can also buy them, and I don't get paid to say that :)
http://www.glidecam.com/

As far as a techincal level goes... 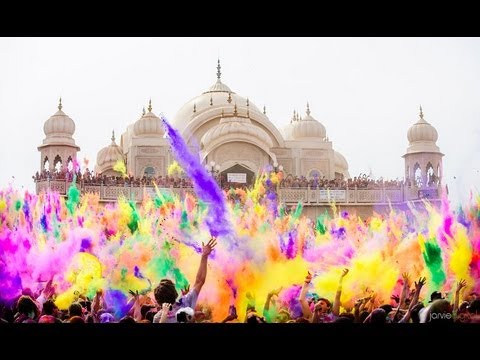 SUBSCRIBE! ► https://bit.ly/3pPvE3z Join Our Community! ► Patreon:https://bit.ly/3nl9rsI For more info on the Festival of Colors, find out more on the...